1.LONG LIFESPAN DUE TO INNOVATIVE ALLOY OF MG + ZN

One of the most important choices we have to make when creating a new product, along with its design, is to determine the type of alloy that best suits its specific application. Aluminum-zinc alloys, magnesium-zinc and titanium-zinc are the most common types of non-ferrous metal alloys used for corrosion protection of metal roofs.

The ZnMg alloy is an alloy in which zinc has a major weight and the percentage of magnesium in the alloy structure is rigorously controlled because it defines the properties of the alloy. Alloy metals are precisely tailored to the hot-rolling and rolling process in VoestAlpine Austria steel and make this material the ideal choice for metallic coating applications.

The proven advantages of magnesium in the ZnMg alloy include a unique blend of low density, high specific strength, stiffness, heat dissipation and vibration absorption.

Also, zinc stabilization in the corrosion process with magnesium makes the thickness of the protective layer much thinner, offering the same high quality corrosion protection.

In addition, it provides increased protection for cut edges ("edges") and accidental scratches, because one of the properties of ZnMg-protected steel is "self-healing". Steel exposed to areas where the protective layer has been damaged (scratches, cut edges, holes, etc.) is protected by the dissolution of the adjacent protective layer, which is preferentially corroded, unlike steel.

In the seaside area, the behavior of the steel protective layer is different. The salt content of the air is inversely proportional to the distance from the sea shore. Zinc is oxidized to the same extent as in urban or rural areas, with the difference that it comes in direct contact with salinity in the sea water (wave breakage area) and with areas where sea water evaporation is strong. The recommendation of VoestAlpine specialists for such an atmosphere is the High Coat type of protection, which has an anti-corrosion protection of zinc 275 g/ m2 or Zinc-Magnesium 120 g/ m2 and 50 micron polyurethane / polyamide, excellent building material for roofing in the seaside area.

2.FIXING FIXED BASED ON RESISTANCE TO SHEARING

Novatik tiles are installed from the top of the roof towards the gutter area, and it`s fixed with anti-corrosive nails or galvanized screws with EPDM washer and EPDM gasket, parallel with the roof, on the horizontal battens of 40/50 mm cross section. In the intersection areas, the tiles are folded for perfect sealing, with no need for mastics, silicone, gaskets or sealing sponges.

The tiles are fixed with nails or screws with minimum density of 8 units/ m2. (each nail/screw, parallel with the roof, fixes 2 overlaped tiles, making infiltrations imposible).

Longrun metal tiles are prone to deformations due to temperature changes. Thermal dilatation is the physical phenomenon by which the dimensions (volume, surface, length) increase as a result of temperature variation. The metal tiles may contract or expand, depending on positive or negative variations in temperature. Consequently, in overlapping areas they can change shape and space between tiles can increase, increasing also the risk of infiltration in case of higher exposure to torrential rains accompanied by strong winds. For this reason, the longrun metal tile was initially installed on metallic battens, which allowed them to move slightly, significantly improving the behavior of the panels in case of expansion and contraction. Temperature changes have insignificant effects on Novatik metal tiles, even if the coefficient of expansion is the same, not affecting the coating precisely because of the reduced dimensions of the panels. If a longrun metal tiles with a length of 6 m and a thickness of 0.5 mm can expand about 5 mm on the long side (in the case of a 80 ° temperature difference), the dilatation of the Novatik tile is approximately 1 mm on the long side and does not affect in any way the area of the panels or the fastening areas.

Wind load is one of the most important criteria for designing and dimensioning the structure of buildings. The wind will manifest its pressure on a surface of the roof and results in depression (lifting) on the other side of the cover (in the opposite direction to the wind direction), leading to the weakening of the fastening elements of the metal panels and in case of heavy storms even when ripped off. The Novatik solution for these possible risks is the way of fixing the nails and screws horizontally. Due to this fastening method, the lifting force of the wind acts on the nails or screws as a shear force, making the Novatik roof very resistant to extreme winds and impossible to pull off, the exception being a faulty dimensioning of the structure thus allowing the roof to be pull off together with the wooden structure. This is one of the main elements of differentiation from other metal tiles systems, which have perpendicular fixation on the roof, systems that have a high risk of being pulled away by strong winds.

In addition to the aesthetically pleasing appearance, Novatik panels provide safety for the toughest nature challenges: earthquakes. Novatik roofs, with interlocked panels and additional shear resistance, reduce the risk of injuries from debris, thus protecting homes and lives. Panels cannot detach from the wooden structure because each tile is fixed in 8 points, thus reducing the danger of falling down the ceilings. Also, older structures can better tolerate low-weight roofs, and interlocked lightweight panels, thus resulting a more resistant roof.

The roof installation system and the perfect overlays of the panels make the Novatik roof one of the safest roofing systems on the market.

3.MOUNTING WITH MINIMUM LOSSES OF MATERIAL

The small dimensions of the Novatik panels make them the ideal choice for roofing with a complex, modern architecture and fully satisfy customer demands for perfect aesthetics.

Novatik`s modern manufacturing technology and rigorous quality control are found in the exact dimensions of the panels, their design and permanent concern for ease and speed of assembly. Assembly of complex envelopes requires many cutting, bending and clamping operations, operations that affect both the mounting price and its tightness. Easy roof installation has economic benefits for both the customer and the builder, reducing assembly time and eliminating customer care for possible infiltration.

In intersection area between ​​the roof and other elements of the building (wall connection, chimneys, roof windows, etc.) or the areas where the different planes of the roof (valleys, box barges, eaves, etc.) intersect, the modules will be cut, and automatically these cuts will generate possible metal waste, which in most cases can no longer be used. In the case of Novatik metal panels, due to the reduced dimensions of the panels and the installation system, the losses are up to 10% compared to other systems that can lose up to 25-30% under similar conditions.

Not often, in the case of uninhabited attics, Novatik can be installed over the existing roof, shortening the execution time, reducing the costs. However, this can only be done following the technical expertise of one of Novatik`s specialists. This makes Novatik tiles extremely cost effective, especially for complex roofs. 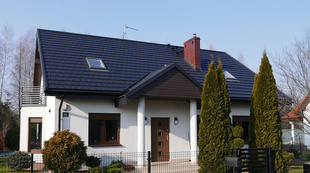 Novatik panels have been designed to provide the appearance of a traditional roof (tile, shingle or slate), but retaining all the advantages of a metal roof: corrosion resistance, solid roofing, durability and low weight. Dimensions have been specifically chosen to create a number of advantages: easy handling and storage, low storage space, low gauge transportation (easy access to urban areas), reduction of technological losses, especially for roofs with a complex architecture. 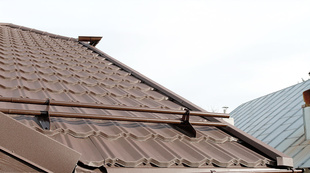 5.EASY TO INSTALL, TRANSPORT AND STORAGE

The model is symmetrical and allows the panels to overlap in both directions (left to right or right to left), facilitating and reducing installation time. The small size of the panels requires simple transport and storage logistics, an average roof size on one pallet. Easy and safe maneuvering of roof modules, installation much faster than traditional roof tiles. 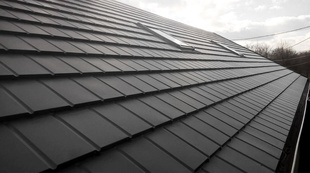 The optimal design of the tiles and their low weight guarantee the proper functioning of the roof and its safety function. Smaller loads for walls and foundation, cost savings to house structure, and increased earthquake safety.

Our products are available only through our network of authorized companies, specialized in selling and installing Novatik roofs.